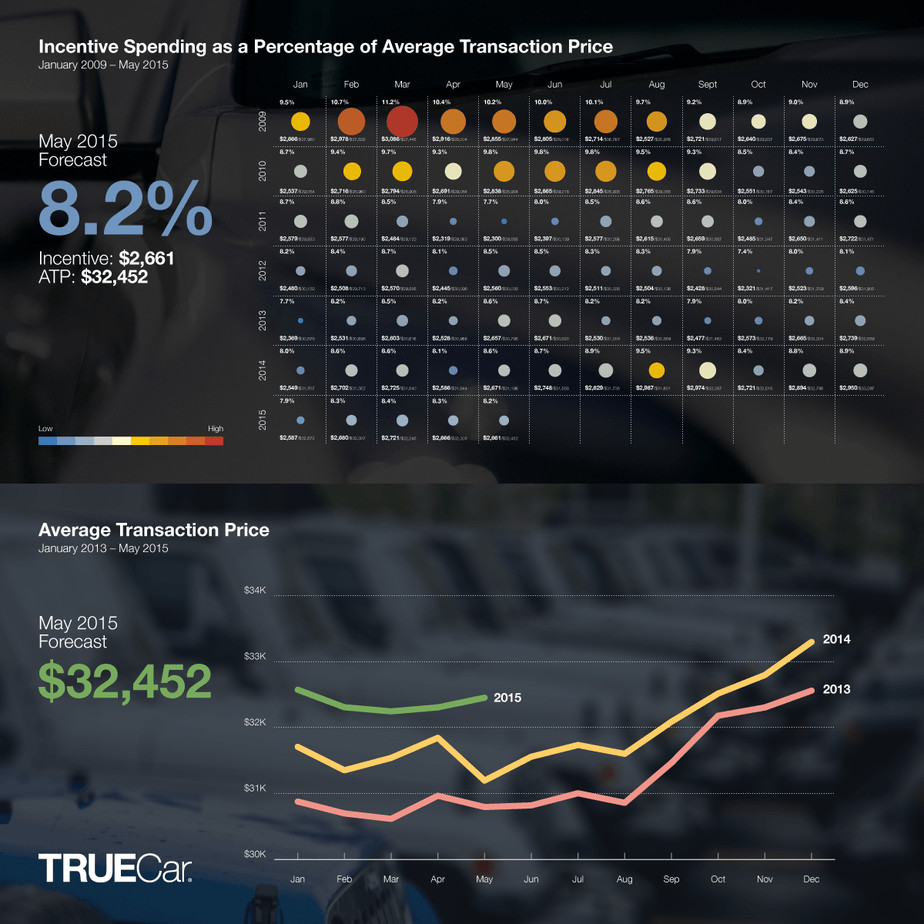 Premium car and utility vehicle demand pushed automakers' revenues to a record $52 billion in May 2015. New light vehicle ATP is up 4% from a year-ago's level. TrueCar, Inc., the negotiation-​free car-​buying and selling mobile marketplace, finds that MayÛªs average transaction price for new vehicles was likely a record high for the month as U.S. auto demand, particularly for premium and utility vehicles, remains healthy.

Amid the best auto industry and economic fundamentals in a decade, TrueCar estimates the ATP for new light vehicles was $32,452 in May, up 4% from a year ago, while average incentive spending per unit shrank by $10 to $2,661. The ratio of incentive spending to ATP was 8.2%, down from 8.3% a year ago. Higher transaction prices in the month generated $52 billion of revenue, up 3.1% compared to the same period last year.

ÛÏNew vehicle sector and segment preference indicates consumers are confident about the economy and their finances,Û said TrueCar President John Krafcik. ÛÏNot only are these shifts to premium brands and utilities telling from an economic indicator standpoint, they signal sizable revenue gains automakers should reap this year.Û

TrueCar estimates premium auto sales grew at a faster rate than mass-​market auto sales in the first four months of the year. Premium brand sales rose 10.6% from a year ago, while mass-​market brand sales increased 4.8% compared to the same period. Sales at the highest end of the premium utility segment, vehicles priced from $75,000 or more, rose 44% from a year ago in the first four months of 2015.

TrueCar estimates May retail sales will grow by 2.4%, with the total industry Seasonally Adjusted Annual Rate reaching a yearly high of 17.4 million units,åÊon pace to grow to 17.1 million this year. ThatÛªs the highest volume for new light vehicle sales since 2001.

Recently revised first-​quarter GDP declined by 0.7%. However several key economists expect this trend to reverse in the second quarter. Pending home sales in April were the highest in nine years, another indicator of a solid economy. According to the Department of Labor, unemployment remains low at 5.4%, the lowest since 2008.

TrueCar estimates the average incentive for light vehicles in May decreased $10, or 0.4%, from a year ago, while decreasing $5, or 0.2%, from April 2015. Last monthÛªs ratio of incentive to ATP for light vehicles was 8.2%, down 4.3% from May 2014 and down 0.6% from April 2015, based on TrueCar analysis. Ford and Subaru showed the most improvement in ATP ratio in May versus the year-​earlier month.

What does this mean for your premium and luxury car dealers? It means they should know more about this audience and target those shopping for premium vehicles! Use AudienceSCAN's data on Luxury Car Shoppers to close the sale. These shoppers are mostly men ÛÒ 65% of U.S. adults considering purchasing luxury vehicles are male. 35% are registered Democrats. 17% of them currently own a Toyota-​branded vehicle. You can reach them on TV: 77% took action after seeing commercials. Or try newspapers: 72% saw ads and took action.