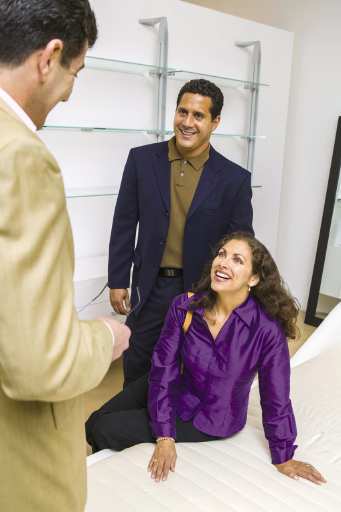 "Consumers are quickly becoming more comfortable buying mattresses without ever trying them out. In fact, the latest Consumer Reports' mattress survey shows that many people bought their beds at retailers with few brick-​and-​mortar outlets or that sell them online, and they like what they're finding."

Here is an opportunity for mattress sellers to advertise why they are better than the nontraditional retailers! AudienceSCAN survey results make it clear that ads/​coupons in mailboxes can reach Bedding/​Mattress Shoppers. 41% took action after getting them in the past month.

Of the four stores that scored highly in mattress store ratings for overall satisfaction, Original Mattress Factory has stores in just nine states (though it ships to most). Costco stores display mattresses standing up, which makes them difficult to try, and sells more than half of them online. The other two, online retailers Amazon​.com and QVC, don't sell this product at walk-​in stores at all.

Consumer Reports also asked subscribers about the stores they rejected. In other words, they shopped there for a mattress but changed their mind and bought elsewhere. Here, too, is worrying news for traditional retailers.

Feature CLEAN floor models in TV spots: 69% of Bedding/​Mattress Shoppers took action after seeing commercials in the past year, according to AudienceSCAN data.

Price is what seals the deal for many shoppers, and Amazon, Costco, IKEA, and Walmart got excellent marks on that score. None of the retailers got top marks for selection, although eight did very well and only one, Original Mattress Factory, aced the Service score.

Market to them in newspapers. AudienceSCAN research found 17% of Bedding/​Mattress Shoppers think newspapers are the best for comparing prices.